I am mixed race.  My mother’s roots reside in England and my father’s roots are from Mexico.  While my last name is Serrano, I did not inherit my father’s dark hair or features, except the lines that surround  my eyes, a testimony to indegenious peoples, or so my father claims.

While being so white, and benefiting from white privilege in so many ways, I straddle two worlds. I grew up in San Ysidro, California, a thoroughly Mexican community.  I still remember living with my grandmother who always had different women making tortillas  in the kitchen.  These kind ladies were always willing to share one with me.  I even admit that when they were not looking I might have stolen a couple for consumption outside on the back patio (Sorry Señoras!).

I straddle two worlds because I have never really felt part of one culture or ethnicity.  I was never really seen as Mexican-American by people in my community. The kids at school called us Los Guerros. And, later on, when I went to a predominately white school, I didn’t feel like I belonged either. It was an entirely different culture.

One author writes about the experience of straddling two worlds.  Virgilio Elizondo writes, “Being a Jew in Galilee was very much like being a Mexican-American in Texas. As the Jews in Galilee were too Jewish to be accepted by the gentile population and too contaminated with pagan ways to be accepted by the pure-minded Jews of Jerusalem, so have the Mexican-Americans in the southwest been rejected by two groups.”

Jesus understands fully what it means to stand in two worlds. Elizondo writes, “The fact that Jesus had been conceived by the Holy Spirit means that the people did not know how he had been conceived. According to human standards, he was of doubtful origins, and thus by reason of his very birth he entered into solidarity with the masses whose origins are questioned by those in power.”

It’s interesting that I ended up being Lutheran. There is something by the nature of theology that draws me ever so closely into the primacy of God’s grace. And yet, once again, I sometimes find myself straddling two worlds.

Recently there has been a movement within Lutheranism that has sought to show that one doesn’t have to be of Scandinavian or German decent to be Lutheran. So there have been Memes that say, “You might be a Lutheran if…” 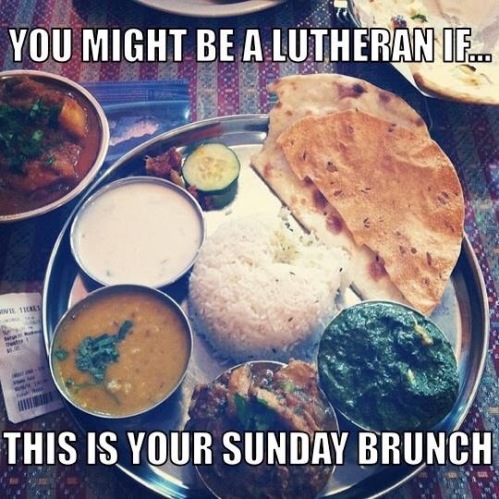 This is not lutefisk.

I think these memes should be listened to. I think people should reflect on their own understanding of what it means to be a Lutheran and show that the primary language of Lutheransim need only be theology not the culture from which it came.

Lutherans, stop and listen to those who are involved in #decolonizelutheranism. They have something valuable to say.

Also check these two people out who have written in this…

Jeremy Serrano This is What a Lutheran Looks Like

One response to “Mixed Race, Tortillas, and #DecolonizeLutheranism”